They play the roots of American Rock n Roll influenced by the likes of Fats Domino, Professor Longhair, Little Feat, The Funky Meters, Alan Toussaint, Delbert McClinton, and Chuck Berry. The Hurricanes are a group of veteran musicians who will rock the house and are guaranteed to get things movin’ !!

Chris is the “voice” of the Hurricanes. His friends named him “Otis” at the age of 14 when he picked up a Fender Telecaster and bent his first blues note. Chris was an early member of the legendary “Blue in the Face” band. He was on the road with Debbie Davies, and plays an important role in the Fairfield music scene, opening and playing with musical icons like Tab Benoit, James Montgomery, Kim Wilson, Mark Naftalin, Buddy Guy, Johnny Winter and Buckwheat Zydeco. “Otis” has left his soulful mark on the music scene from Toronto to Atlanta.

“Smokin’ Joe” developed his style as a songwriter/musician in the Berkshires and on the road performing or in concert with artists like Taj Mahal, Arlo Guthrie, Paul Butterfield, Average White Band, and Robert Cray. Adding to the band’s gumbo, Smokin’ Joe will pick up his accordion for the band’s Zydeco dance tunes.

Chris was inspired to start a band in high school after seeing The Beatles on Ed Sullivan. In college, he played rock n’ roll at ski lodges, was Assistant Principle Double Bass in the Berkshire Symphony and studied jazz with Jimmy Garrison, John Coltrane’s bass player.

After graduating, Chris toured and recorded with McKendree Spring, making three albums and opening for The Eagles, ZZ Top, Fleetwood Mac and Frank Zappa among many others.

In 1976, Chris moved to New York City and worked with artists including Robert Palmer, Chuck Berry, Bo Diddley, Darius Brubeck, Marc Cohn, Elliott Randall, and Jon Pousette-Dart. He relocated to Connecticut in 1993 and has been playing with Otis & The Hurricanes for over 20 years.

Doug’s musical career began in central Pennsylvania which is where he went to school for music. Before graduating he joined a well established traveling regional roots Blues band where he played over 140 nights a year. He had the good fortune of opening for, and sharing stages with, the likes of B.B. King, Gatemouth Brown, The Nighthawks, Charlie Musselwhite, Roomful of Blues and many more. Doug then moved to Nashville where he took to the road with both national and international acts. First, he was hired as the music director for Sam Moore of “Sam and Dave” before working in T. Graham Brown’s band for a number of years. He was then invited to be part of the Mavericks horn section “The Havana Horns”. Doug has been a regular member of the Hurricanes for over 12 years.

Rick grew up near San Francisco and majored in music at the University of California at San Jose. He studied with Maestro Eugene Graves and Anthony Cirone (principal percussionist with the San Francisco Symphony) as well as with Chuck Brown, a well-known Bay area teacher whose former students include Terry Bozzio and Dave Garibaldi.

Rick has toured and recorded with a range of artists including George Duke, Kenny Rankin, The Don Ellis Orchestra and Jorge Santanas’ Malo, He also worked extensively in both the L.A. and San Francisco recording scenes with numerous artists. Now living in Connecticut, Rick performs with Otis and the Hurricanes, Crystal Cymbalogy, The Grand Slambovians and Terra Coda.

Roy Rodriquez has been rockin’ the house for decades and frequently joins The Hurricanes on stage. He has performed with many top artists including Lucky Peterson, Sonny Rhodes, Debbie Davies, Paul Gabriel (Blue in the Face), Kal David and Jeff Pevar (Crosby, Stills and Nash) to name only a few – and we always enjoy having him on board!

Perched behind his Hammond B-3 organ, Roy never fails to get the crowd moving with his funky rhythm parts and outstanding – sometimes otherworldly – keyboard solos! He’s also a great singer. And a funny guy. Ask him to tell you his latest joke when we are on a break. 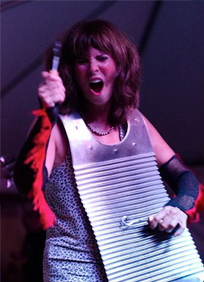 aka Li’l BeeDee lends her percussion skills to the Hurricanes on the rubboard, or “frottoir” as it’s called in Louisiana Cajun and zydeco country where the instrument originates.  She is on the A-list first call for all New England zydeco and Cajun style bands.    She was also a founding member of  “Girl Howdy”, a woman-strong honky tonk country band that was based in western Massachusetts. Betsy-Dawn loves playing the rubboard, whether in the realm of zydeco, rhythm & blues, or funk, simply loving the flexible percussive flair it can add to a wide variety of genres.